Gosh, I was toying with rolling through my weekend events backwards, but I’m more likely to forget things if I go that route. So, fair warning, this is going to be a loooooong post, because lots happened & lots of miles were traveled, and there’s just so much to talk about! And there are pictures! Go grab something tasty to drink, and put a little Pete Yorn on the iTunes, and read along…..

Saturday: I left the house, late, to head to El Dorado Kansas. Now, if you’re from the general area you know that it’s not pronounced the way Texas says their city. It’s El Do-RAY-do, a long “a”. I put that in as a snippet of trivia, and because my Auntie Karen couldn’t believe her ears last week when I said it. I’ve never been west of Lawrence or Topeka, driving, so it was an adventure! It rained pretty much the entire way, sometimes a downpour of biblical proportions, sometimes a light drizzle, so my OCD got a workout adjusting the wiper blades to the perfectly correct calibration based on the varying degrees of rain. I went through the Flint Hills, which were stunning. Breathtakingly beautiful! I love how this country has such wildly varying terrain and I am always awed at the new things I’ve never seen before. These hills were a color of green not ordinarily seen in my everyday life. I was blown away, and inspired to dye some yarn, quite frankly. I then tried to take some pictures, but alas, was unable to capture exactly what my eyes saw. 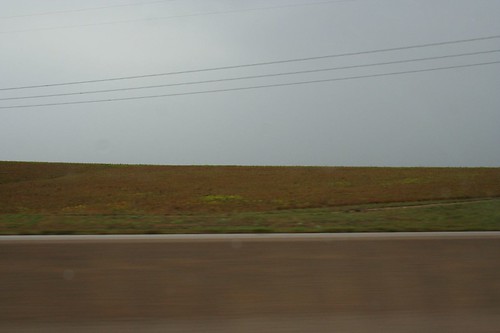 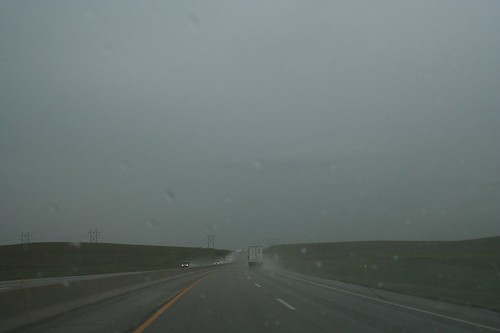 I finally arrived at my destination, and met Laura, to get started on seaming up the afghans for the folks of Greensburg. We could’ve used a few more hands, but with a little instruction, Susanna, Laura’s 11-year old daughter, was put to work on an afghan with me & we were able to finish the 56-block blanket that day. I started a second one & will get that done soon! There were two television stations covering the event, and I caught one snippet feature on the 10p news that night – Kyra was seaming & looked up at the camera and said “hi!”!!!! Laura is going to bring a bunch of sorted squares to Kansas City & work with Cindy at the Studio to get them seamed up by volunteers here – I know there are numerous folks who’d love to pitch in locally, and with enough helpers, we’ll have the survivors of that devastating tornado at least wrapped up in some local, national & international love in no time! 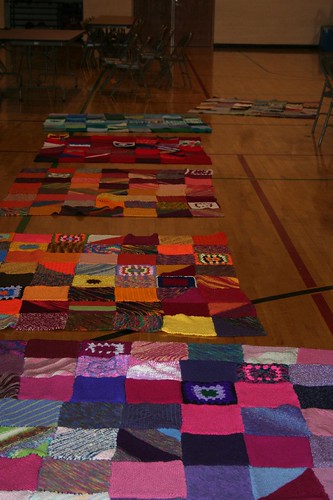 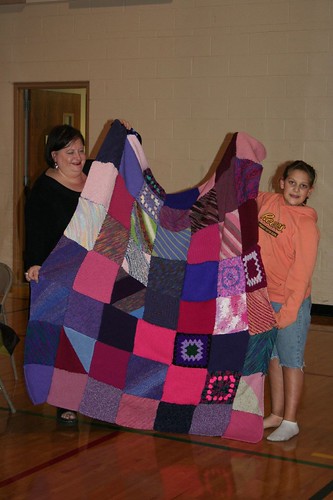 OK! Are you still here! Good! We’re only one day into the monologue! At the end of the day, I toodled on in to Wichita, taking a very circuitous route, because I was not clear on how to get back to the highway, so I made my own route. It was ok, but a bit longer than it should have been. Then, I hit Wichita, and frankly, Wichita? We need to talk. The fact that all the roads have not one, not two, but THREE highway numbers? And your signs are sometimes placed at varying degrees of closeness to the actual exit? Well, let’s just say that if you’re trying to discourage people from living there, this is an excellent way to do it. I ended up sailing north again, and because I had printed off, um, like, 5 different map scenarios for myself, I realized pretty quickly I was no longer headed towards my bed & breakfast. So I got off on 13th Street, and deduced I could head west on that street, catch another highway & go back south. See, I didn’t want to turn around and find myself back at the intersection where it had all gone badly the first time. Plus, who doesn’t want to do a little exploring?

Let me tell you this much. Thirteenth Street? It definitely has an abrupt line where it goes from one socio-economic class to one quite its opposite. I can’t find a picture of it, but I about threw my neck out when I sailed by what could arguably be called a castle. The biggest building ever. Ornate, lush grass, and the omnipresent gates. The gates were big. High. Sturdy. Some of the gated communities had little guard houses (with guards!) and I was surprised. But then it quickly became clear why. The drop from Big Money to No Money was steep and fast. I was in the ghetto in a matter of blocks. The vast divide grows wider between the have & have nots. Me? I just wanted my interstate to appear, rather quickly, and I finally made my way to the B&B.

Which was nice. It’s a little odd, having your bathroom down the hall, but since I was the only guest there (in the upstairs, anyway, one couple was in the basement suite), it wasn’t an issue. I went out & procured some of the Absolutely Worst Vietnamese food I’ve ever had, gahd, what a dreadful disappointment that was, and then took a jacuzzi bath, read my book & crashed like a grand piano on the sidewalk.
(Oh god. Wichita. Please. You need good Vietnamese food. I’m so sorry!) If I had more time today, I’d be eating V. food to make up for the horrid, godawful meal I had. I shudder!

The next day, I proceeded to look for Target. I wanted to get a different pair of shoes, and perhaps just wander my familiar, favorite shopping place. My map? Outdated. I found Wal-Mart, and KMart and a whole bunch of other big box stores, but no Target. I finally pulled into a QuikTrip (I love the universal experience one gets at the QT. Clean, friendly, NICE.) and was told how to find the new, moved Target. I then went to Twist, the wonderful new yarn shop, and met up with the Crew from KC – Beth, Kyra, Kristin, Ruth, Jimmi, and there were knitters from all over. We had lunch & then it was off to the Yarn Harlot book signing/speaking engagement. What fun! But oh mah god, my butt. The seats were made for 1940’s-sized arses, and they made thunking or creaking or whining noises, which makes a big gal a mite nervous when she squeezes into one, and so I am proud to say my ass muscles are practically sculpted from the hour-plus suspended clenching as I braced myself for the moment the entire seat broke apart. Fortunately, old-timey seats may not be comfortable? But they are sturdy as hell. Iron and wood. Here’s Jimmi & Kyra during the waiting period. 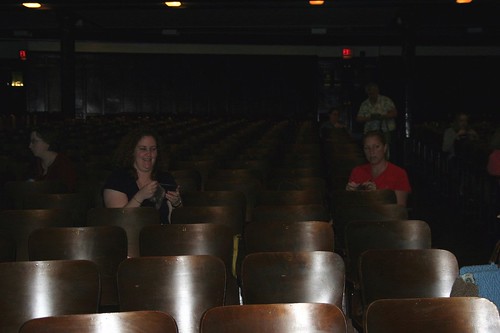 Stephanie is truly a delight. Her talk was funny, there were so many things we knitting fanatics understood and the connectivity exists, no matter how wildly different we all are. I will say we are different. There was one woman who had a small stuffed sheep, and she made it clap at times, covered its ears at others, and sat it on her shoulder while she waited in line. I’m going to leave it at that, except I will say I’m really glad nobody in our party was doing the same thing, because I might have to say something and it could result in a knit night fricasee of beanie-baby proportions and discussion of age and what you do in the privacy of your own home versus my line of vision. Back to the Yarn Harlot, Stephanie was so kind to stay as long as people were there, waiting for books to be signed. Our tickets were numbered on the front, and we were under the impression that was the order we’d go in – and woohoo! Numbers 9-16! But no. It was the numbers they stamped on the back when you entered. Numbers 100-113! Boohoo! But actually, it sorta worked out. We hard core knittahs hung around to the bitter end, and that’s when all of us, including the Yarn Harlot, got punchy. I have pictures to prove it. And she’d heard of PlazaJen! It was like my other famous Canadian encounter, meeting Bryan Adams, without telling him I’d had a sex change operation and if he also read my blog. Only better. Loads better. Because Bryan DOESN’T KNIT.

First, my Chevron Scarf, in the hands of Canada’s most famous Knitting Humor Writer: 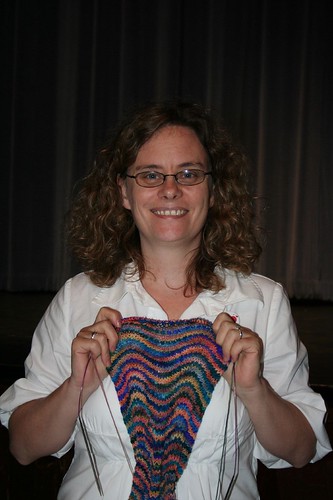 I got to pose with Second Sock: 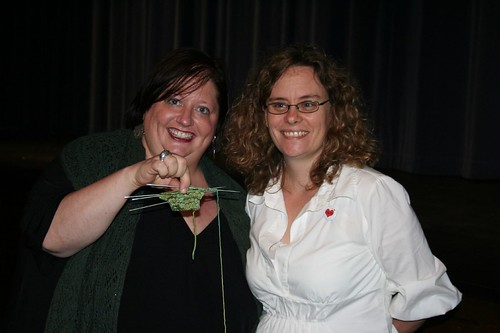 (I am wearing my Mystery Stole! Many people came up to me and showed me where they were in the knitting. It was fun, and the perfect venue to make its big debut.)

I Kinneared her feet. It seemed fitting. 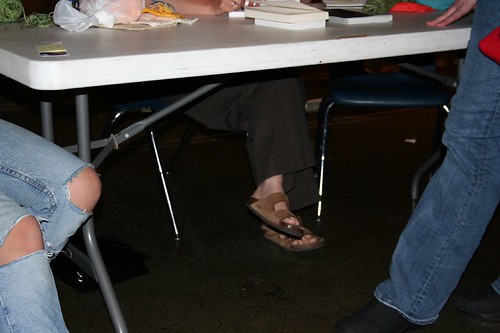 Then, I started taking a bunch of pictures when Kristin was meeting her, and Stephanie might have made a comment about she sortof was feeling like she was having a stroke from all the flashbulb flashy flashing. Sorry. I didn’t stop, and then the ladies got into posing. There was even some voguing. Here, they are doing a photo shoot for a Sears catalog: 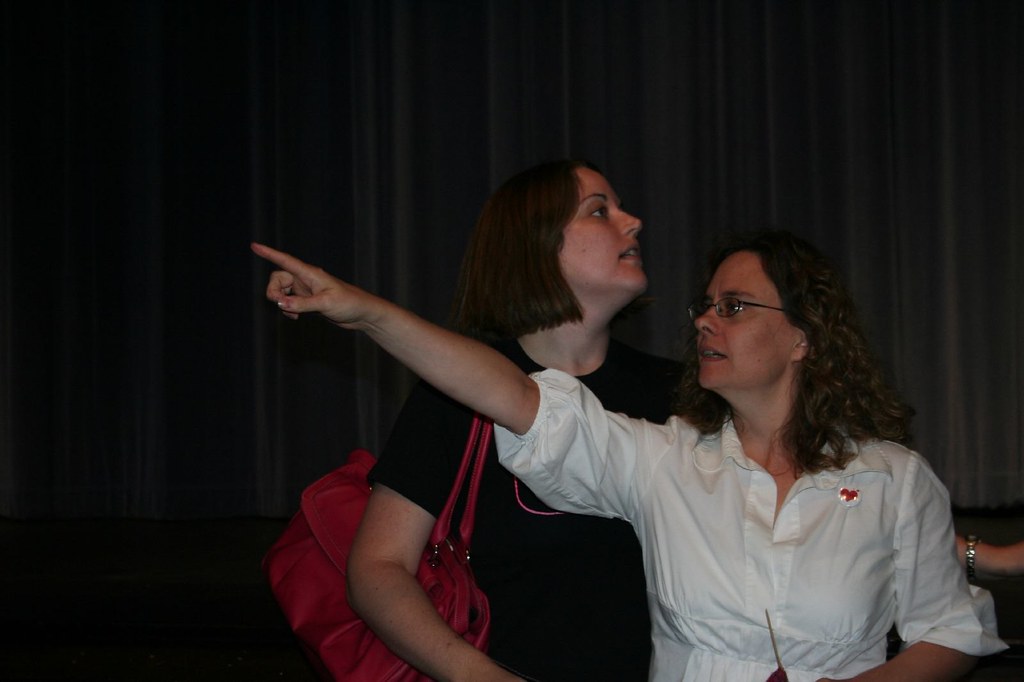 There are more pictures over on Flickr, and I’ll leave you with this one. While she never actually said she wanted to punch me, this photo sort of implies perhaps she might, and I also think Kristin looks like she would completely back her up in a Wichita Minute. Ah, fame, how drunk you make a BFF. 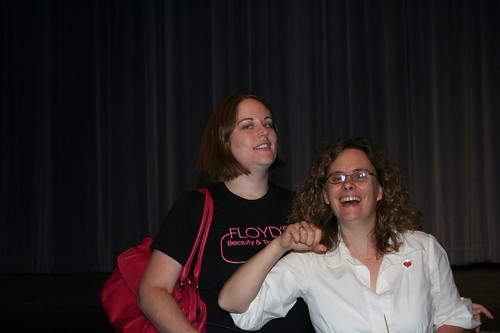 See, now, there was more, because we had to drive home? And we stopped for dinner at a Village Inn in Emporia – and that had loads of hilarity, too? But I can’t type any more & I need to order a sandwich before my webinar starts. The real world has crashed back around me, but I had a super-duper weekend and I’m glad I did everything I crammed into the weekend! (Except the Vietnamese food. Gah. It’s going to take a long time for that memory to fade…..)