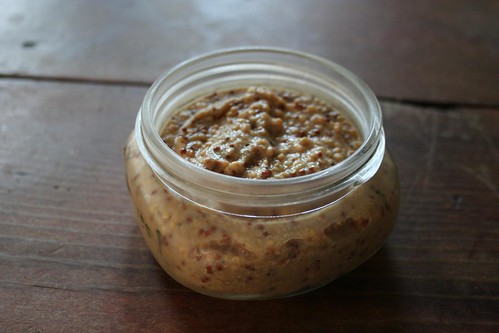 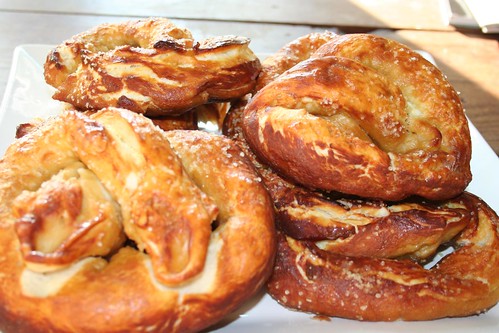 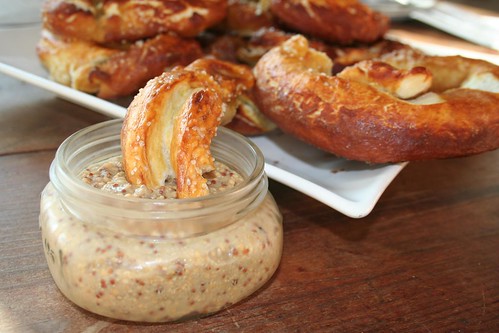 As we hibernated indoors yesterday, away from the stifling humidity, most of our energies wound up in the kitchen. I had been wanting to make Peter Reinhart’s recipe for Casatiello, and Italian Brioche, studded with bits of spicy salami and gouda cheese. What I love about his book is the complete thoroughness of instruction; he describes the process of how the dough will evolve, and what to expect. This dough has a high butter content, and after the butter has been added, the dough is very sticky, and altogether messy, resembling cookie dough. His instructions tell you to work the dough for 12 minutes, for in that amount of time the butter will distribute evenly and your sticky mass of dough evolves into a beautifully smooth, tacky ball that cleanly rotates around the mixer bowl. It was definitely one of those angels-singing marvel moments as I watched it happen. I baked it in a square springform pan to make one loaf; you can bake it in bags and in smaller sizes more typical of Brioche, too. It’s delicious, and made me wonder about other cheeses and even adding snippets of fresh herbs, such as the French tarragon that is always looking for something to creep into….. 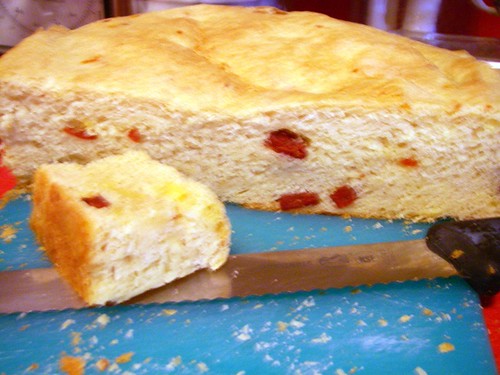 In-between my dough mixing and shaping, James took over the kitchen and used the mixer’s food grinder attachment to make an amazing tomato sauce. The food grinder is great, because you get all of the pulp and meat and juices of the tomato, while efficiently discarding the seeds and skin. We have almost all heirloom tomato plants, and the flavors of these tomatoes are out of this world. Describing a slice of Carbon uses similar language as describing wine… smokey, bold, strong finish. So when you mix all these robust, intense flavors together, and cook them down all afternoon, you have a sauce that literally sings to you. He also incorporated caramelized onions and banana peppers, plus some sauteed chicken tenders. As James put it: summer in a bowl. It was excellent. 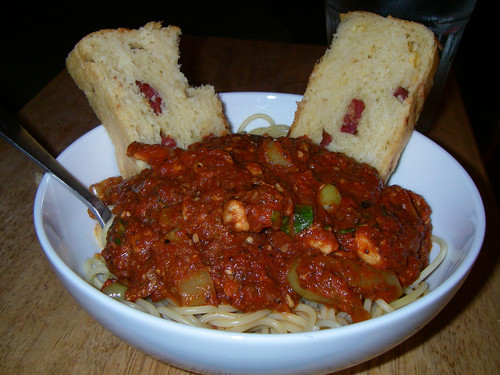 So where’s dessert? Well, this is a good example of how mistakes happen – even to those of us who’ve been cooking and baking for over 30 years. We had leftover egg yolks, because earlier this week, James had made zucchini bread, and one of the most awesome ingredients he uses is candied nuts. He’d done both pecans and walnuts, and the candying process uses a bunch of egg whites. So, what to make with egg yolks? Well, certainly a custard comes to mind – and with the heat, why not ice cream? Sounded good to me. Some things you take for granted, some things you don’t think about, and sometimes, even when you’re standing right there at the stove, stirring your mixture of cream and sugar and eggs and bits of natural vanilla bean, you take your eyes off what you’re doing to talk to your spouse, and the next thing you know, you have bits of cooked egg separating rapidly from your liquid. Gah. I tried plunging it into a water bath, stirring madly, but there are chemical processes that just don’t reverse themselves. I pitched a fit, pissed-off with myself for forgetting how quickly chemistry can happen, and then had to decide what to do.

I decided to give it a try, anyway, because the flavor was amazing, and not eggy, but the big question was texture. I chilled the custard, then put it in my Krups machine that I’ve had for 20 years. And waited.
It never froze. I think it was the fact my custard was too warm, still. So what to do? This is when experience is a good thing, because it makes you more resourceful. Rather than focusing on the failure of ice cream, I focused on what was wrong with my dish, and what could I turn it into? I had it: Milkshakes. I strained the custard through a sieve, removing the bits of hardened egg proteins. Then I added frozen strawberries to the blender until it was completely full. I figured that if any of the egg had made it through the sieve, the texture would be masked by the presence of strawberries (and keep in mind, the mixture never scorched, and was utterly, vanilla-ey delicious, despite the overcooking.)

The result was stupendous. My husband declared it to be one of the top 5 milkshakes of his life.

What was leftover was poured into a dixie cup, popped in the freezer with a fork in it to make a makeshift ice cream bar. The texture on that might be a bit grainy, but at least we know it’ll taste good!

Now it’s Sunday, and I think I’d like to go out for brunch.

I hosted a little get-together a couple weeks ago, and it not only inspired me to clean the house, but I also got a little Martha-Stewart-ey in the planning and preparation process. It was a great excuse to pull out all my antique pink milk glass, and also try out a tasty cocktail recipe from the latest issue of Martha Stewart Living.  This cocktail was written to be served as a punch, but I mixed all of the non-carbonated ingredients together in a pitcher, and then splashed club soda in each glass as I served it. Martha’s recipe calls for separate juices (Pomegranate and cranberry), but I found it easier to just buy a blended bottle. Same with the recommended Cointreau – we’re on a budget here, and frankly, I don’t think spending $30 for a liqueur that’s going into a juice blend is necessary. The $10 bottle of Orange Curacao worked just fine!

The cocktail was pleasantly tart with a sweet aftertaste, and it had a spicy, holiday flavor. Experiment with the juices, and if you make individual servings, you can also try out gin, my personal preference!

Mix everything but the club soda, and pour over cranberry-studded ice cubes. Feliz HannyZaa! You could celebrate all three notable holidays with this drink.

*simple syrup: 1 cup of water, 1 cup of sugar – heat on the stove, stirring constantly until mixture is boiling. Turn off the burner & allow to cool. This will make about 1.5 cups of syrup, so enough for three batches of drinks.

Wash some fresh cranberries, then place in empty ice-cube trays. If you’re like me, your ice cubes don’t come out clear like all those foodie photos have. One trick is to boil your filtered water (distilled apparently works even better), let it cool, return to a boil, cool again, and then pour into trays. Mine still weren’t crystal-clear, but they were prettier than solid white cubes. These are a nice touch for your holiday get-togethers – whether in a cocktail, or with 7-up, or even water. 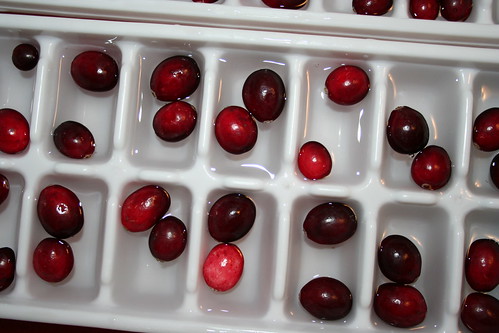 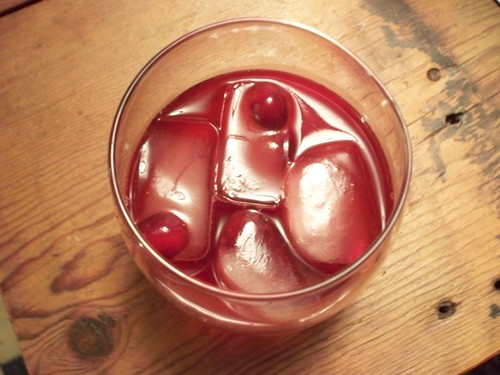 We’re in high harvesting mode with the garden, and while we can always freeze or can the tomatoes, coming up with a new way to eat zucchini or yellow squash can get a bit challenging. A few weeks ago, I remembered one of my favorite breakfast joints in Minneapolis, and how they specialized in egg scrambles loaded with non-traditional breakfast things – namely, vegetables. So I gave it a whirl, and darned if it isn’t just as tasty as I remembered it to be – and now I’ve created my own version, with summer squash!

I’ll admit up front, measurements and precision aren’t my thing when making dishes like this, especially because I think you can be flexible and include what you want. This isn’t a chemistry-based dish, where you need the right amount of leavening agent or a proper ratio with your flour. Experiment yourself! And you can get your veggies in before noon….

About 3 cups sliced vegetables (I used one small yellow squash and one small zucchini, a few jalapenos and a bag of frozen broccoli. Fresh broccoli is even better. Cauliflower would be delicious, too. Mushrooms. Peppers. You get my drift!)

Saute the onion until it’s softened, then add your veggies to the skillet. You want to cook the veggies to a stir-fry consistency, so there’s still some structure and bite in them, not mushy. Right as the veggies are nearing that stage, pour your beaten eggs over the whole thing, and gently stir and turn in the pan, cooking the eggs. Once the eggs are done, I added the tomato and then the cheese. I basically wanted the tomato to get to the same temperature as the dish, but without any further cooking, since it was the softest veggie in the mix. Season to taste – and devour! It reheats well in the microwave, so save your leftovers. You could extend this even further (and add a starch) if you folded in prepared hash browns right before the cheese-melting stage. 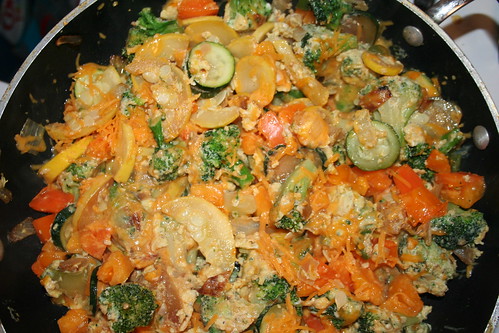 If your tomato crop is running over, hubs has a great bruschetta recipe on his tomato blog.  It’s a wonderfully tasty summer appetizer – we made this into dinner one night, it was so good. We used fresh mozzarella, which is definitely more traditional, but if you like goat cheese, I can’t recommend going that route enough. The tangy goat cheese definitely takes it to a whole new level!