I finished the Studio Sock Club socks a while, back – Sivia Harding’s “Journey” socks, out of Claudia Handpaints Sportweight in Woodland – these are so warm and cozy, I just love ’em, and the cables are snazzy to boot! 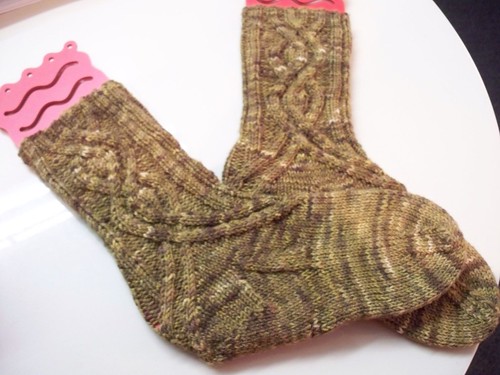 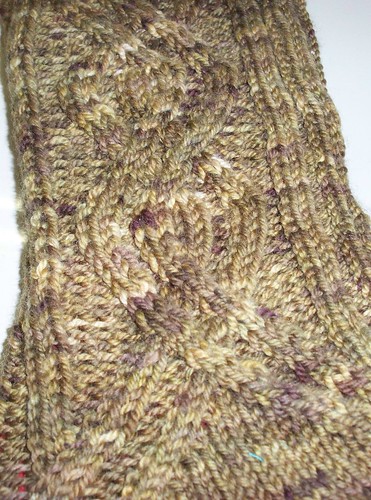 I also am participating in The Loopy Ewe’s Spring Fling monthly KAL’s – which have been great motivators to finish things, but this month I’m a bit panicked. I finished last month’s project just under the wire, and without fringing or blocking. I made the Crest of the Wave scarf, and then added the Fringe from Hell. It’s gorgeous, but it kills me. KILLS! So much braiding. And then beading. But I love it! This was knit out of Numma Numma Toasty, Black Cherry Jam. 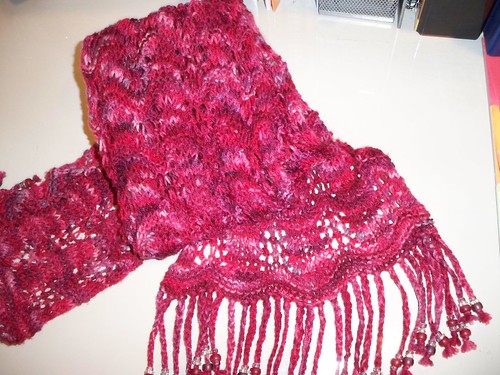 LOOKIT THIS FRINGE. Now look away, before you feel compelled to do it yourself. 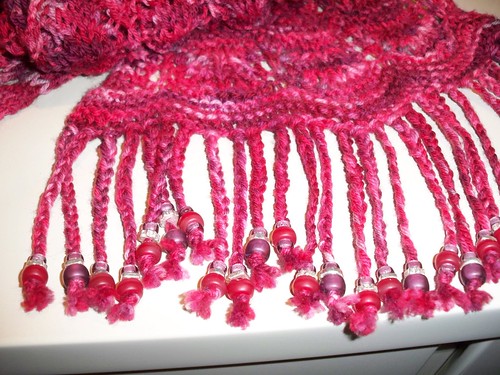 Now I’m working on the Boing! scarf pattern by Anne Hanson (sorry, I’m uber-lazy, it’s Friday, I haven’t linked a single thing today). This is knit with Tofutsies, and even on 1’s, it’s still rather open. I’m such a loose knitter. 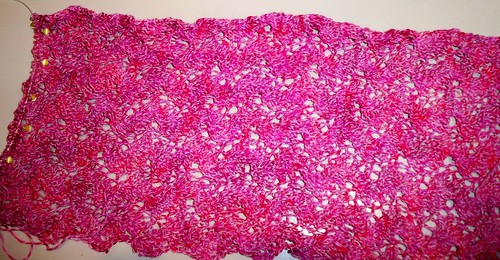 Now, since our KAL ends next Saturday, and I have a lot of work stuff going on (and travel – which is usually a plus for knitting, but still), I realized I’m probably not going to complete this in time, so I’ve pulled out some Aran Rustic Wool, and started whipping out a very pretty Poinsettia neckwarmer, since I still need to make a gift for a friend, and I’ve already done the first set of neck repeats in one evening. That’ll get done, and hopefully, Boing will be right behind it!

In other randomness, and utterly unrelated, we have continued to have our homeless man problem at the office (staying overnight in the stairwell), and yesterday morning’s stench was almost enough to topple a Marine. I mentioned it to our office manager, who in turn, called the building manager. I noticed when I left that liberal amounts of pine-sol had been used. (which actually didn’t change the situation !) And when I say liberal, I mean, perhaps-an-entire-bottle. So then I wondered, would that actually entice said homeless to sleep there? Would it be like snoozing in a Carolina pine forest? There’s your ponder for the weekend.