OK, there’s been a lot going on…. let’s start at the beginning, rather than the middle, mmmkay?

Friday Night Fish Fry. Well, this was a bit of a bust. We went back to St. Thomas More’s, where it all began for us, and they’ve changed their fish this year. The baked fish was pretty good, though rather bland, and the fried fish was resoundingly over-battered. And it wasn’t “battered” but rather “triangular-shaped fish object” and my first bite pulled away an empty corner of…batter/crust. No fish. Argh. Sides? Ok – your standard green beans, corn, and french fries, plus slaw & buttered boiled potatoes (which I do so love.) Desserts were once again run by the girl scouts, and I must say, the girl from last year who delightedly applied whipped cream decided to get industrious, and created a tray that she took from table to table, upselling people who perhaps weren’t going to mosey over to their table to choose a dessert. I had seen pecan pie, and she dutifully went back to get some. Pretty cute. But not worth a return trip, sadly. $8.50 per adult.

Sunday Blogger Meet Up. Well, is it really a meet-up if it’s just two of us, and we’ve already met before? Emma Liar is back in Kansas City, and had a hankering for Hooter’s chicken wings. So we got some. 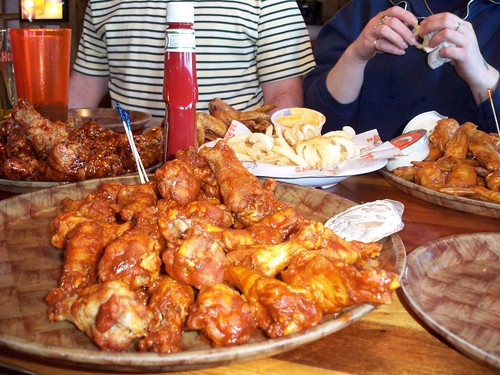 And after we got home, I busted my hump to finish the wristwarmers. I knit on them all throughout The Kingdom, which is a very stressful movie, I think, and if you’ve seen it, you’ll understand the jarring disconnect to turn that movie off & immediately see Jason Bateman introducing the Foo Fighters on the Grammys.

I knit so much, and so devotedly, that all my tiny little fine-motor-skills muscles ached. Even my ear ached, and I blamed the knitting. But I got up this morning & wove in the ends, and Bravissimo, here they are! 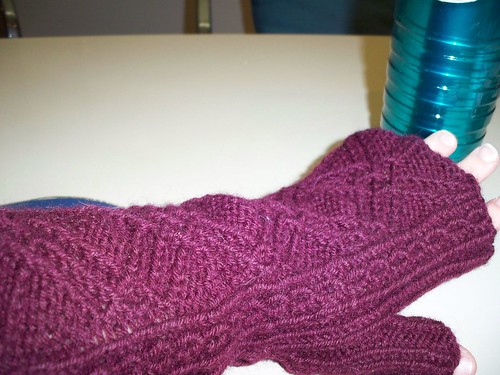 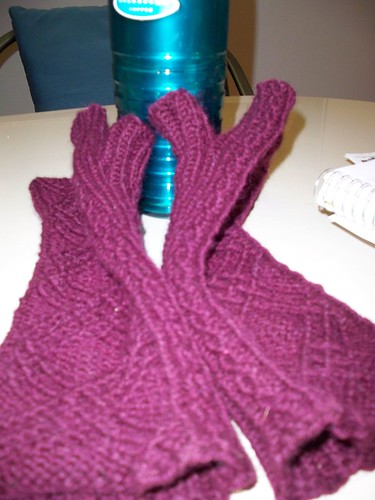 I can’t wait to knit another pair, but in finer-gauge yarn and smaller needles. Hello, have you met the Masochist who lives on CandyCane Lane? Yep, that’s me!