It’s been a while. Yup. That whole ‘life’ thing gets in the way of blogging sometimes. Here’s the latest!

1. I spent a good chunk of my day on Friday in doctor’s offices. Basically the annual tune-up. Everything went well, all’s good – last month I felt a small lump/bump something-or-other and knew I had to get my appointment made for the now-annual mammo. Turns out, it doesn’t even register on a sonogram, so it’s just something to be mindful of and not worry about. Oddly enough, I spend so much of my energy worrying about crazy things, this incident didn’t worry me at all, up until the x-ray tech was on the phone to my doctor getting orders for additional tests. However, I was impressed with their efficiency and springing into action; in retrospect, wouldn’t want it any other way.

2. We are going on VACATION. Remember last year? We bought a $100 pool and had ourselves a staycation. Now everywhere you turn, you see something about staying home and building your own vacation. Whatev! Staycations are so last year. 😉  Don’t get me wrong – blender drinks in the pool was lovely. And we’ll do it again this year. But some of those pool drinks are going to be consumed in CANCUN. We’ve also booked two fishing trips while we’re down there – one’s at night! The resort we’re staying at looks lovely, and I’d been saving my airline miles for…wow, 12 years. So those helped a bunch. Now to count the days until we go. Oh, and the best part of this is that my doctor had asked if I’d taken a vacation or had plans to – I told her we really hadn’t gone anywhere since we got married, and that I was wanting to go to Mexico (not afraid of H1N1), and she adamantly ordered me to GO on vacation, go to Cabo, or Cancun, just stay away from Mexico City and enjoy myself.  So, Doctor’s Orders!

3. Work continues to be busy. We’ve had a few days of relative calm, but mostly it’s just all-out flying through the day. Home is busy, too – James has really put a ton of effort and time into the garden, and it looks awesome. He’s got 55 tomato plants a-growin’, so we shall not want for ‘maters later on! And peppers and eggplant and okra and beans and snap peas, plus we have lettuce and radishes and green onions and spinach right now. He’s definitely taken the garden to the next level this year!

4. So if you’re a knitter, or crocheter, or spinner, then you most likely know about Ravelry. I’d say that most places that have large gatherings of fiber-holics end up with most people referring to their “Rav Name” or even adding it to their nametag. Not a crazy thing or out of the ordinary. But there are some people who’ve been banned or kicked off the site, and let me tell you, there’s always one with an axe to grind! At the Fling, one lady went OFF on another knitter who’d just put her Ravname on her name tag. “This isn’t a Ravelry-sponsored event. What are you trying to be, exclusive?” (It went on for several awkward minutes.)  She was such a pill, and so mean about it, that those of us around her thought she was joking at first. After all, it’s not like Ravelry is some sort of niche offshoot group, in fact, it’s been a uniting force.  This lady ended up driving a couple friends of mine into a small ante-room to escape her, she was so angry and rude. I think that’s the kicker with any sort of group – even political – how you can be united in one direction or passion, and then you turn around and there’s somebody wearing a plushie suit with a confederate flag on the back, ready to pray for your sins and damn you for eating red meat. Or, just someone who loves a lotta fun fur.

5. Speaking of knitting, I’m flying along on a baby gift – the Moderene Baby Blanket (RavLink – yep, that’s me being exclusive!), which I’m making out of  Dark Horse from the Studio – it’s so soft, and not acrylic-y at all. I love the color ranges, too. Oh yeah, pictures. At some point. 🙂 BUT! I do have a picture of a stealth project a whole bunch of Spring Flingers worked on – I’ll explain more, but we had nearly 50 knitters contribute tiny knitted hearts to someone who needed some extra love. Pretty cool, and a great reminder that even though there may be bad apples here and there, the majority of folks are really good people. 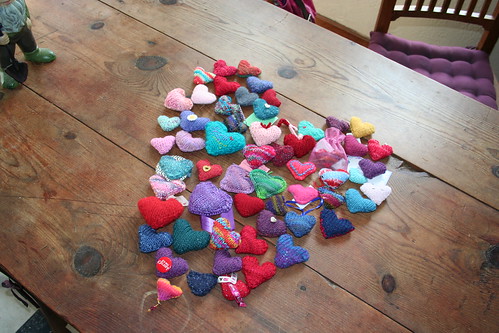 OK, it’s been a lazy Holiday Monday! Hope everyone had good weekends, spent at least some time this weekend remembering why it’s a holiday, and goes back to work refreshed & rejuvenated. That’s my goal, anyway. Oh, and yeah, check yer boobies. It’s important!