I love broccoli. A few years ago, the Wo planted broccoli Rabe and we snarfed it up. This year, he planted a Rapini variety called “Rapa Senza Testa”. Wellza, Weza Liked itz a Lotza!

It helps to like greens, and broccoli and spinach, if you’re going to cook with Rabe or Rapini.

Here are the cleaned leaves from the plant: 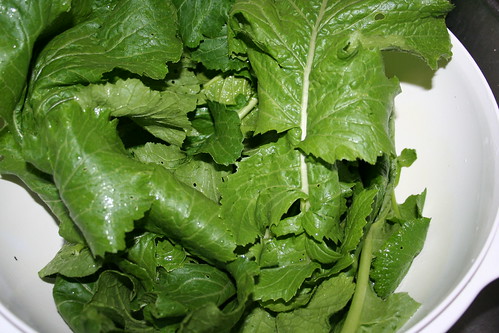 I picked a variety of leaves – some bigger and older, some were newer and greener. With the older leaves, I tore the leafy part into goodly-sized chunks, and avoided the stem, especially at the base. (That part can get tough.) I left more of the stem on with the younger shoots. Two plants yielded about 5 cups or so of the green stuff – and while that sounds like a lot, you will quickly see how it disappears when cooked!

I started with a big ol’ Vidalia onion, and sauteed it in olive oil until it was semi-soft. Then I added some minced garlic. (So as to not burn the garlic, since it takes a lot less time to cook.) 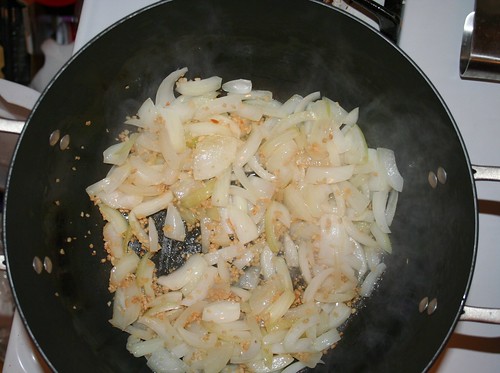 Once everything’s soft and cooked, here comes the mound of Rapini: 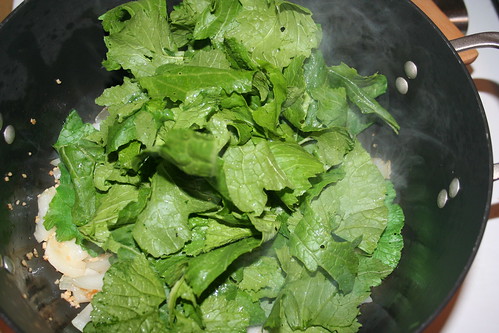 Which quickly becomes this: 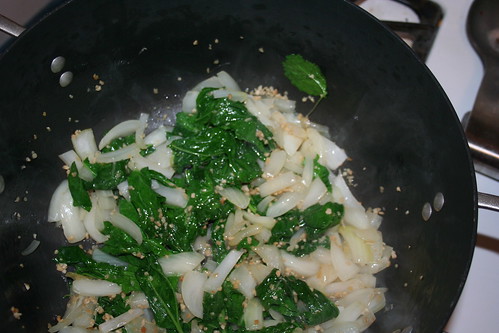 Meanwhile, a quick trip to Fritz’s yielded the protein in the dish (Sweet Italian Sausage Links): 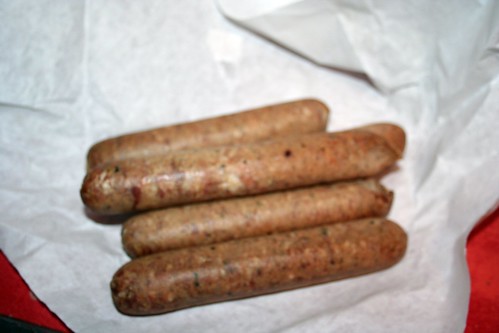 Now, you can use a spicy sausage, and it doesn’t have to be in link form – you can cook it up with the onions, just drain off the fat. I’ve made similar dishes with spicy meat and it’s equally delicious. These links are pre-cooked, so I didn’t have to worry about cooking time. Just sliced them up into delicious rounds, and added them to the mixture. 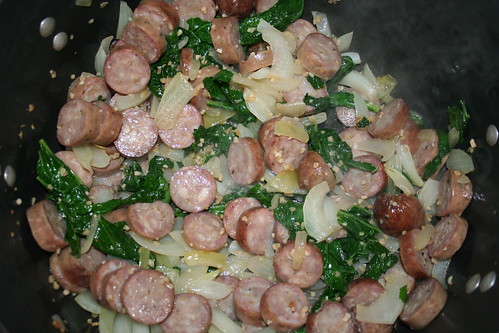 I added freshly-ground pepper, and about a cup of water with a couple chicken bouillon cubes half-dissolved, and let it simmer. This is a brothy pasta topping, and since the bouillon already had plenty of salt, I didn’t add anything else. Since you’ve got a stronger component with the greens, balanced with the sweeter meat (or robustly complemented, if using a spicy version), you really don’t need a lot of herbs or other seasonings – of course if you want to throw in some basil, or something else, experiment away!

Spoon it over a nice curved-shape pasta – these were called “gnocchi” even though they were actually just a little fancier shell-shape. Trumpets, corkscrews, rigatoni – you want shape and the ability to grab a little extra juice. My photo got a little blurry, but you get the idea. Top it with some fancy Parmesan, or powdery, depending on what you did or did not remember to get at CostCo, pour yourself a nice cheerful white wine to keep it light, and savor the flavors! 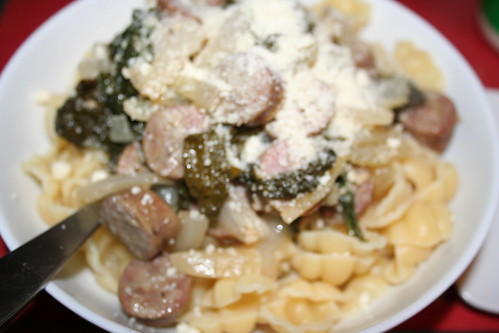 In other gifts from the garden, here’s a shot of the stir fry I made the next night, with four days’ worth of snow pea harvesting: 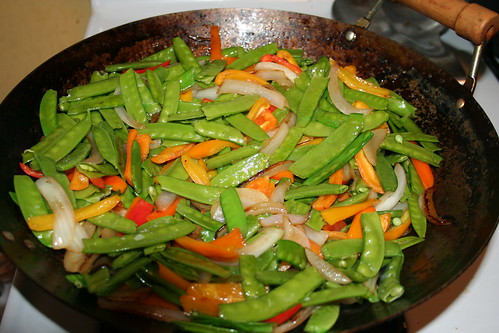