The Hottest Pepper in the WOooooorld

Well, ok, as of 9 am, my husband discovered there’s some NEW pepper that has about 130,000 more Scoville units than the Bhut, but I really don’t care. BECAUSE I ATE THE BHUT.

The Ghost Pepper (as it’s commonly called) has over 1 million Scoville units to its pedigree. That means it’s super calicrazyfucking hot. A jalapeno has about 2500 SU. A habanero has 100k-350k SU.

Keep in mind, all the dudes were gung-ho. Oh yeah, gonna eat this chili pepper. And five of them did. My brother-in-law went all out and ended up eating about half a pepper. (HE CRAZY.) I decided to try a chunk of habanero. It really, really burned, but wasn’t debilitating.
Then the Wo finally said he’d try the Bhut. I’d told him I’d do it if he did it. (Which Beth was QUICK to remind me after he’d taken his bite.) So I did. And it really didn’t do much.So I took another bite. Ah, yes, that one …. resonated.

Here’s the crazy thing, about both the habanero and the Bhut: both had an unbelievable fresh, citrus, bright clean flavor. Before the heat even began. They were utterly delicious. Like your brain’s going, “Well, what the hell, you rang up and warned me this was going to be difficult and it’s surprisingly charming and OHMYGODOHMYGODOHMYGOD” because then, yes, after that delicious milli-moment, the burn rapidly takes over and it’s as though you’ve maced your tongue. It really does burn. But the endorphin rush is also something to be reckoned with. I felt like I’d had a victorious afternoon hike, followed by a relaxing hot tub. All from a vegetable sliver no wider than a few staples.

And I did get very hot from it. My skin flushed like nobody’s bidness: 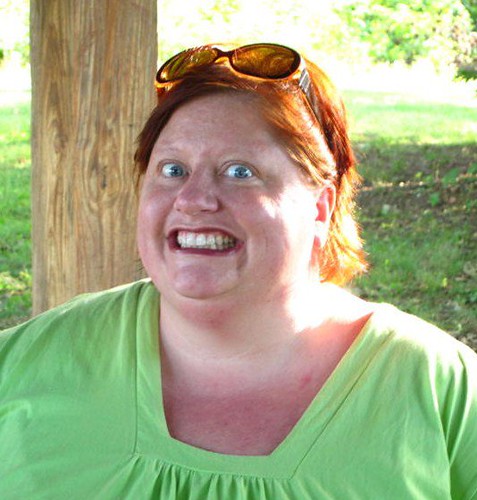 But I have bragging rights now, and I can certainly stare down any bowl of salsa in the future and say “I’ve had hotter…”