Or, as the lady who strolled up with her kids while we were waiting called it, “Story Corpse.” The Wo and I both laughed about that one later. 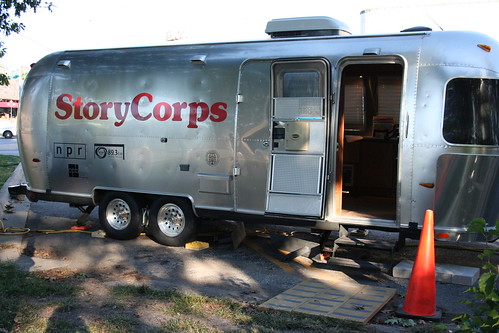 This was parked in Brookside for the past few weeks – part of a journey two Airstream trailers make on each side of the Mississippi, gathering stories and memories shared between two people. On Wednesday evening, we got to be part of that really cool, special opportunity: to record ourselves and be a permanent part of the collection in the Library of Congress. One person is the interviewer (me) and the other person tells their story (the Wo.) When reservations were first open, I logged on about 10 minutes after they’d begun, only to find nothing was open. That’s how fast it filled up. I added myself to the waiting list, not thinking it would actually happen. Then, I happened to be on the computer when the email came out to all of us wait listers, and there was only one time slot that could work – I crossed my fingers and replied. Thirty minutes later, I got confirmation that we had the 5:30 slot!

Because I’ve been listening to NPR for so long (I answered, “My entire life,” which is pretty much true, apart from some breaks here and there), I knew what we were doing, but the Wo got a bit panicked the night before as he read some of the sample questions. As he put it, “Nobody expects the Jenquisition!” Of course I wasn’t going to ask him unnerving, awkward questions, and I knew how he’d answer most of the questions, anyway. Eleven years and change of togetherness combined with a pretty good memory (sometimes too good) and I figured it would go pretty smoothly.

It did, there were lots of laughs, some tears/watering eyes, as we touched on the highs and lows of our combined lives. We exited with our own CD of the 40-minute conversation, and we’ll have a certificate and our own little place in the gigantic library someday. Who knows, maybe we’ll be one of those Friday morning voices I hear on Morning Edition. (I’m not counting on that.) I did fall completely in love with the microphone and noticed I totally dropped my voice when I asked the questions. Made me think, hmmm, maybe podcasting isn’t such a goofy idea after all. Heh. But what I really took away was a reminder of how much I love this man, how much he loves me, and how much I cherish our life together. 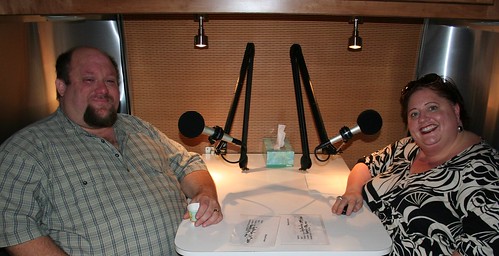