For the Love of a Bestie

It’s never been a big secret, my dislike of musicals. It’s not that I hate ALL of them, certainly – in fact, it surprises even me, the number I’ve seen and enjoyed. Chicago, Sweeney Todd, The Producers (the original), Rocky Horror Picture Show, Rent…. I’m sure there a couple more in there, but as you can also see from that list, I’m not into classic musicals and apparently, if it’s not got twisted humor, then there should be death.  OK. So, my BFF, Beth, has teased me forever about musicals, because she loveloveloveLOVES them, and Moulin Rouge is her favorite. She even told me the other night at knit night that she now had it on Blu-Ray so the original DVD could be mine for a low low price.  It’s always been a funny piece of our friendship.  So much so, that on October 22, 2010, she sent me an email with this text:

I’ll quite pestering you about watching musicals if you make me these.
Not an easy bargain for either, but you might win in the end.

(Pattern linked to designer’s blog so all can access. Ravelry pattern link here.)

Now, what made this even funnier is that I have never been much for colorwork, the technique required to create these things. In fact, I think I’ve even been heard to proclaim how much I hate it. But a seed was planted. A challenging seed. And as I continued to knit on my holiday presents, my brain thought and buzzed and finally concluded I could knit these things. Not to end the banter, never, but because it would be a fantastic present.  A present knit with adoration and humor, and hopefully, not too garbled and jacked up, since my skill set in the technique category was low.

I won’t lie and say it was easy. Especially at first. I started out using Knit Picks Palette, as three of the ten photo-containing projects on Ravelry had been knit with it, and I was ordering some other yarn for holiday knitting. Egads. First of all, it’s splitty as hell. Second of all, even on a Size 0 (that’s tiny, for the non-knitters who have read this far), they were coming out grotesquely huge. I made a mistake in the chart, and decided to start over. (This was giving me some practice on my stranding!) Second attempt? Still came out huge. I couldn’t believe it. So I turned to the trusty folks at the Loopy Ewe, and ordered yarn from their new solid series of “house yarn”. Barn Red and Sand. And oh what a difference yarn twist can make. I’ll confess, there are a couple rounds here and there that are a smidge tighter than they ought to be. But in the end, they made a certain birthday bestie very happy, and I’m damned proud of the knitting accomplishment – because in the process, I came to enjoy knitting colorwork, and even have plans for some other projects now.  What’s especially funny to me is that I watched a TON of MI:5, the British spy drama, while knitting on those, and it often feels like the things we watch are knit up into the stitches, as we look at something we’ve made and recall what we were doing while they were created – so they truly capture both of our passions.  May she wear them for years to come! 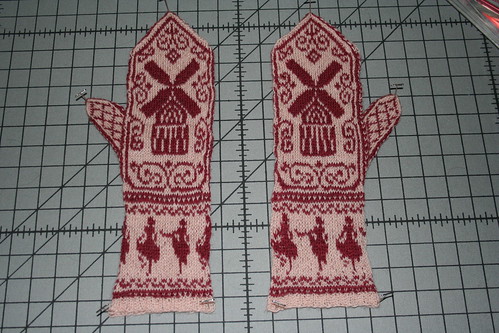