Since I’m at home all day, I get to see things firsthand, not hear about them after the fact. You know, it’s like “24”, and I’m Kiefer Sutherland, and all events are in REAL TIME.  Yesterday was Delayed Garbage Day, due to the holiday on Monday, and the Wo is in charge of trash. I had taken advantage of the nice weather and wheeled out a huge bin of recycling the evening before, but we never put the trash out earlier than possible, since Feral Cat City across the way will destroy it in their efforts to find things to eat. We hadn’t had problems the past few weeks, but all of that changed. Just like the weather had. So my head actually exploded – yep, brain matter, bright spots of blood everywhere – when I looked out the window and saw this after the garbage trucks had been by: 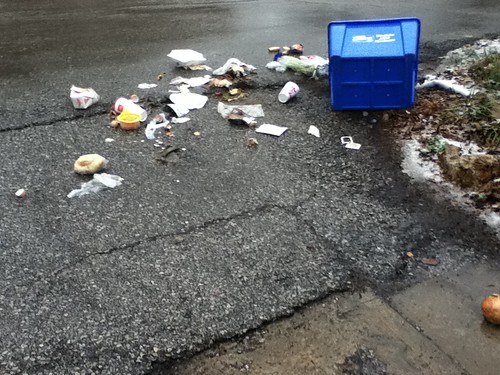 Granted, I was livid before I even went out the door. And I did grab my iTouch, along with plastic gloves, a huge trash bag and a scoop shovel, just so I could capture the moment for posterity.  But the weather did nothing to improve things, as I was pelted with sleet and rain, and my jeans were sopping wet from the ankles down due to puddles. It occurred to me, as I lost my temper and may have shouted a few things out loud at the sky, that I was now matching Crazy Cat Lady, toe to toe, as I swore and punched the sky and invited her to come over and help me, since she maintains the presence of these feral creatures by feeding them. I think I saw some curtains move, and I wondered what I would do if she actually DID come out, because I knew it wouldn’t be to help, but to screech at me about her poor starving kitties (that she doesn’t REALLY care for, or even bother to collar, since you can’t come near one.) That would have been an interesting blog post, for sure – and in my dream version, the rain and sleet would be augmented by the fire hydrant between our homes spraying into the air, and despite my personal dislike for him, I would play the role made famous by Mel Gibson, and Crazy Cat Lady would, of course, pick up the part played by Gary Busey, and we would end this Battle Royale once and for all. (Yes, Carmen, you can show up and play the role of Murtough.)

A Girl can dream.