Tales of the Crazy Cat Lady

So as you know, we’ve got a Crazy Cat Lady in the neighborhood. As in, across the street. This past spring she had what we could only guess was yet another small unfortunate fire, as random burnt objects starting showing up on her curb. (She is not familiar with the 3-1-1 Action Line for bulky pickup, either, so we get lots of opportunities to eyeball the assorted flotsam that resides on the curb for days on end.) One of the piles got dubbed “Crazy Cat Lady’s Rugs and Remnants” because it appeared to be some hideous ’70’s carpet, a carpet pad and god knows what else.
ANYhoo.
She is, sadly, mentally ill, enhanced and distorted by alcohol and prescription medications. Gaunt as a skeleton and severely aged by the ravages of her abuse, she is hard to look at, and she can’t make eye contact. She also pretty much detests us, as we are mean and don’t bend to her requests like, “Give me a phone,” or, “I need to come in your house,” or, “Give me three cents.” (I’m still struggling to puzzle out that last one.) Sometimes they are just statements: “I lost my cell phone.” Ohhkay. Sorry?

But I have not told all of her stories here – and there are some doozies. We are coming up on the year anniversary (Halloween), when she went completely batshit crazy and laid down in the middle of the street, barefoot and wrapped in two acrylic blankets. I was still at work, JWo had called the police, and a cheerful kind woman in a brightly colored caftan and sneakers had pulled her van over and was directing traffic around CCL, who was now curled up by our telephone pole. I came up over the rise in the street to see this montage of crazy in front of me and was boggled by the insanity of it all.

According to CCL, she was having a “surge”, and we should look it up on the computer. (JWo’s fast-witted reply? “I don’t think they make that soda anymore.”) She lurched back to her house just before the police arrived, and refused to let them in. We thought if she had stayed in place, we’d certainly have the scariest trick-or-treat house on the whole street, because her rising up out of the dark would scare the piss out of grown adults, let alone 8-year-old kiddos!

She really has become such a fixture among the fire department, paramedic team, and hospital that a couple strapping firemen came by a few weeks ago and asked us if we’d seen her, as they hadn’t gotten called out for a couple weeks and they were just checking in. It’s a strange blend of funny and sad, to be that reliant on public servants for help that they notice when you stop surfacing; it’s tragic to lose your existence into that pit, and it’s kind of funny because we’re all sort of thrown in on this same “team” whether it’s geographic or service based, so you can literally strike up a conversation – even with the 911 operator – about her, because everybody knows her. The veritable female version of Norm from Cheers, but less robust and certainly no match to his snappy wit.

Pretty sure the house will have to be razed when she finally departs this world (though there’s something about a certain breed of alcoholics – tough as nails and somehow bionically fueled by their diluted bloodstream, and she could be around for decades to come.) Right now there’s a hodge-podge of refuse by the curb, with more random piles and a large barrel for burning out back.

People keep pointing me to the Crazy Cat Lady action figure that’s out there -but what can I say? We’ve already got our own version! 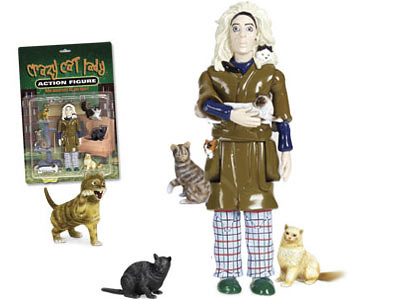