In-between meetings today, I saw reports that the suspects in the Paris massacre were killed, just as they hoped to be. They had stated they wanted to die “the martyr’s death.” As I have done my entire life, I consulted the dictionary, because I have sat here muttering at my computer screen that these acts of terrorism have nothing to do with a deep sense of strength or pride, or the Muslim faith, and everything to do with cowardice, fear and a cult-level brainwashing.

The first two definitions are:
1. a person who willingly suffers death rather than renounce his or her religion.
2. a person who is put to death or endures great suffering on behalf of any belief, principle, or cause: “a martyr to the cause of social justice.”

There are two additional definitions of being a martyr, both defining one in that insufferable way, where you just want to tell someone to build a bridge and get over it (“it” usually being themselves.) That’s not what we’re talking about. You either suffer for a greater good, as an icon in society, or you believe so deeply in your faith that to do anything else would be a dissolution of self. But are these people, with their AK47s, killing people because they draw blasphemous cartoons, are they adhering to a religion? (RELIGION?) Is terrorism a religion? Because when I think of someone who died as a martyr, I think of Benazir Bhutto. A woman who knew she would die, just as her father did, but felt so compelled to help the people of Pakistan and bring them greater freedoms, that her ideals could live on, long after a bomb tore her body apart.

So I only ask that you think a little longer about it, and when you hear the reports that these men died as martyrs, to consider that those were their words, not necessarily the definition of martyrdom. Because – it is my opinion – this is the face of a martyr, a woman who gave her life to make her part of the world a better place, not through murder or destruction, but cared to the point she was willing to die if necessary so she could continue to work for the people of Pakistan. And her sacrifice should not even be in the same stratosphere as the terrorists who died today. 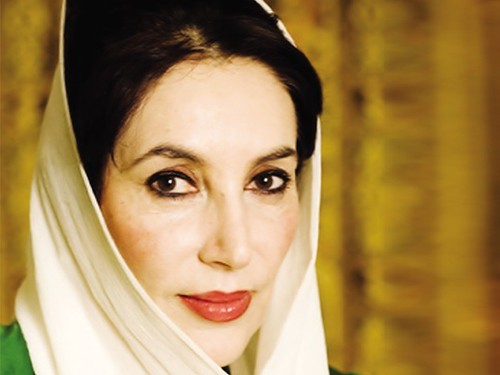