And I Shall Do the Orts, and at Least One Shall Be Philosophical

1. I’m in a really good mood. Like, really good. I’m finally feeling like some of my old anchors and new irritants have blown free. There are still ties and strings and some remnants knocking into the side of the hull, but mostly, things are good. I had a great one-on-one with my boss, and things are just hunky-dory. I wish I had more work to do, but now that I’ve written that down, it should pick right back up & I’ll be stressed out in no time!

2. Being a Midwesterner. This really rocketed to the front of my head this weekend, as I took several knitting classes, and the instructor is from the East Coast. I hate to make sweeping, general statements about groups, so this feels rather fidgety to write. I’m writing from the perspective of a born & bred & never-left Midwesterner. Raised in NE Iowa, lived in Minnesota, Iowa & Missouri after college, I even felt that I crossed a little into the South when I left Iowa behind to reside in my current state. I know there are parallels between the South and the Midwest – but there are things about being in the Midwest that we claim in our own odd way. Idiosyncrasies, boundaries, just… WAYS. They’re “Our Ways”. Some things are more extreme up north, I’ve discovered. I’ve laughingly called one of our syndromes “Three Times for Pie”, because where I was raised, you waited until the third offer of pie before you could accept it, and actually enjoy it.

Why? Because it was the only way to guarantee it was truly ok, and not an imposition on your host, to eat that pie. That pie might be for her family tomorrow night. You never know. Midwesterners don’t ever want to be a burden, and that goes double if you’re in a guest/host(ess) situation. We have extreme regard for the guest/host dynamic. And it can be easy to violate. We expect to be asked if things are ok to do, you don’t just help yourself to things, and in return for your formality, we will do backflips to make your stay as accommodating as possible. Now, in Missouri, I’ve discovered, you only need to offer pie twice, and sometimes once, and it’s readily accepted. But that’s among people who know each other well, and if there was a whiff of doubt that said pie was originally destined for another occasion, well, the turning down of pie would still happen.

Now, I know that I don’t always fit the stereotype I’ve just begun sketching. I’m loud (that could be embarrassing, don’t draw attention to yourself so much), I speak up and say what I think, if I believe it will result in a good dialog, and I’ve even made some choices where I know -cognitively, intellectually KNOW – that I am putting the other person in an uncomfortable situation. This is in direct opposition to the MW Way. (And 99% of the time, those situations happen at work, and involve reps trying to get away with something.)

We don’t joke about hurting feelings, or say it’s a goal to make someone cry or humiliate them. That makes us shift uneasily in our seats, because if you can say it, you might even try to do it, and the laughter is polite (because still, we cannot stop being polite and proper), but it is nervous and has an awkward undertone. Some people can take it – some people can’t. Even if you can take it, you automatically feel defensive on behalf of the people who can’t. I remembered in a flash at lunch today that the instructor jokingly said to me that she hadn’t made me cry yet (or broken me yet, or something to that effect.) I responded in a very quiet voice that it would take a lot more than this, and might just be impossible. It is in those moments that I feel the mettle of my own being, it is a lovely moment of control and confidence and indeed, stubbornness, because I will not be broken for the amusement of someone else. Oh no. I physically feel my heels digging into the earth at the notion of such a tete-a-tete and I see myself ala Uma Thurman in Kill Bill, gesturing “come on, motherfucker” with my hand.

Now, I know that should someone have burst into tears, I believe this person would have felt terrible, never having truly intended for it to get to that point. Why do I think I know this? Because we’re all alike under our layers and baggage, and even if you are an asshat day trader who screams all day in the frenzied pit of paper money, we all were infants at one point, who looked to another to care for us, and to unconditionally love us, and we never lose that piece, to feel treasured and appreciated, acknowledged and understood.

And so, when I gave JWo a brief recap of today’s drama, his offer to slash everyone’s tires, once again, was the brief flash of light that makes me laugh and reminds me that it’s all small stuff. And it’s all IN the small stuff. How you behave, as a guest or a host, is defined in the small things – yes, it’s wonderful if you as the host pick up the check at the $300 dinner, and you take your guest and their kids to DisneyWorld, and you shuttle them to and fro on their vacation. But it’s in the small things, the words that dance between mouth and ear, the small kindnesses, the respect, the appreciation of effort: that is where the real measure is taken. I’m not going to go into all the details of the class, I’ll end up getting crispy-fried in a flame war, but I think I have a really balanced perspective of it. For me, I got some really good things out of the weekend, but wish it had gone “better” overall, in the nature of the tone and vibe.

Gee, I think after all that, I may have only one more Ort in me.
#3. Suzy made the paper on Saturday, with this fabulous photo: 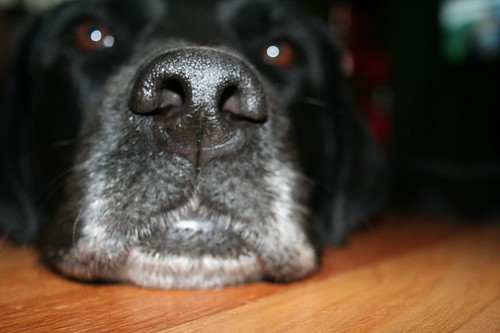 The KC Star did a feature on Black Dogs (and the correlating “Syndrome”, that black dogs suffer a bad rap & are much harder to get adopted) & they encouraged readers to send in their pictures of adored black dogs. Suzy made the paper, Suzy & Polly made the online slide show, and poor Tripper, he didn’t make the cut at all. He’s young though, and finds his joy in chewing, eating grass, and playing with the other two.