Today has begun at a full-on gallop, and I don’t expect it to subside any time soon.

I would be remiss if I didn’t start at the beginning, though – JWo’s birthday was on Saturday. We made plans to go down to Truman Lake, and do some fishing. We planned to find a motel or cabin, spend the night, fish Sunday morning, and then get home mid-afternoon. Didn’t quite work out that way, but we still had an enjoyable day. It was more…boating. And trolling, and attempting to catch fish, and bait, but really, all we ended up catching was a drum and two channel catfish. Over 8 hours. Lemme tell you, my butt was SORE. We did go ashore around lunch, and just anchored the boat while we fixed sandwiches & ate Twizzlers – in the water, mind you. Swimming was lovely, the day was bright & there was a breeze. I have the faintest of pink on me, because I slathered myself in 50 SPF sunscreen and wore a hat (hey! Check out the big brain on Jen!). But we just could not succeed in the fishing department. (Many fisherman blame the full moon, fwiw.)

We did, however, see some really awesome wildlife, since there’s a state park on the water; we saw oodles of deer, and lots of wild turkeys, and loads of buzzards. (I was not enamored with the buzzards, as I associate buzzards with death, they’re hideous, and in general, they just kinda freak me out.) At one point, I looked at the bank and squinted, asking James, “What IS that over there?” He looked (in a different direction) and said “Buzzards.” I said, “With a WHITE HEAD?” Nope! Turned out to be a bald eagle with an immature bald eagle, most likely a momma guiding her baby around the coves and teaching the finer points of fishing. So that was really nifty, and I must say, bald eagles walking are about the same height as small children. They’re huge!  I definitely would not want one diving in at me every day & ripping out my liver.

I like to work in my highly under-utilized knowledge of Greek Mythology whenever I can. It’s really a service we provide here at PlazaJen Enterprises.

In other news, I’m jetting back to NYC to meet with the folks at CR, and I am finally, really, truly, bona-fide excited about it. I realized last week that I was caught in the undertow of grief, all of which can be intellectually understood, but, unfortunately, not reasoned out of by logic. Because winning the Consumer Reports account is a huge, huge personal and professional accomplishment – and the one person whose approval I worked for all my life, the one person who would have been really impressed, would finally have something awesome to tell people about his kid who works in advertising – well, that person is gone. Broke my fucking heart. Brings tears to my eyes now just to acknowledge it so openly. But hey. I imagine parents who have kids and watch the milestones pass after their parents are gone have a similar row to hoe.  I’m not special or alone in this quagmire, and the mantra of time always comes back around to haunt. At least enough time has passed already.

In other work positives, we did a business-to-business campaign for a client that has gotten some positive press in the New York Times (look at us GO!) I was in the initial brainstorming & came up with a couple of ideas that the client actually liked & therefore got implemented, which is always ego-boosting. Times like this remind me that I’m not just media, I’m a creative thinker, and as penalized for that as I was at the last place, it’s nice to have it fostered and allowed to flourish here. I can’t make things look pretty or do graphic design, but I can come up with some wacky cool ideas and clamber around inside the consumer/target’s head. (end self-congratulatory paragraph NOW.)

In amidst of all of this, I really am knitting! I am! I have almost finished another Montego Bay Scarf, which will be a present, due to the yarn I used. (Current sock club selection from Blue Moon Fiber Arts – the pastels are soooo not my color palette.) I have been teaching classes, too, and hawking my knitter window clings on Ravelry and in local yarn shops. (I definitely need to get some more shops to carry them, when you see them in person they really get the knitters ooohing & ahhhing. In my spare time.) 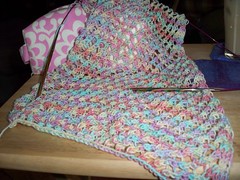 I also made fresh pico, two weekends in a row. The first one was using only yellow tomatoes; it was tasty, but did not keep well. Probably not enough acidity. The second one was your standard red pico, and I unloaded most of it at the office. 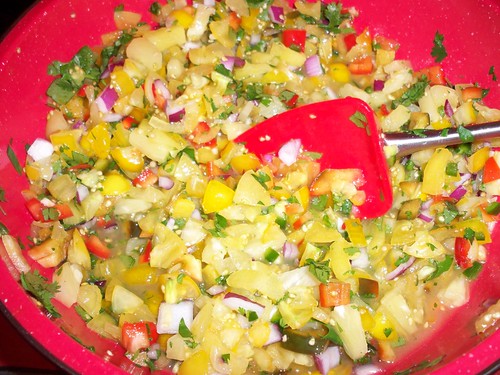 Tripper is all healed up, though he does have some white spots where his cuts were. We continue to enforce Pack Order. He, however, still engages in Mini-Battles Royale with both the girls. 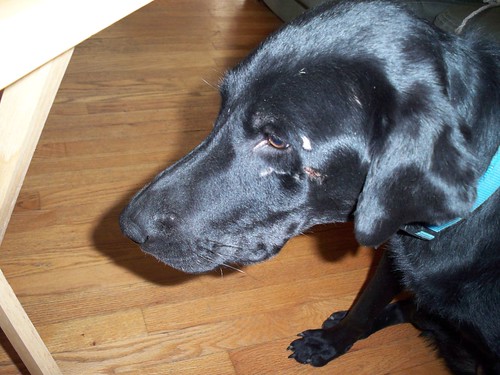 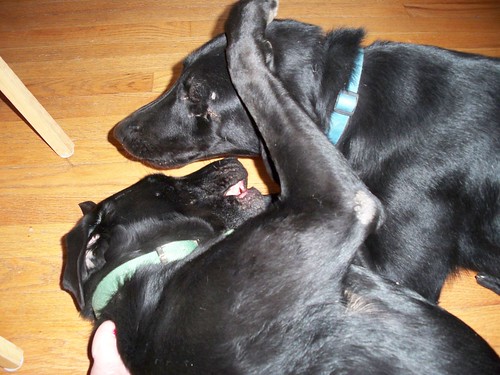 And I had to include this pic of Polly, because it captures her so well. She is a masterful sneaker-upper, and can army crawl like nobody’s business. If she thinks she’s remotely near trouble, she can lower her entire body into a hunched contortion, slinking across the floor. She’s so gentle, and just wants attention, attention, attention. 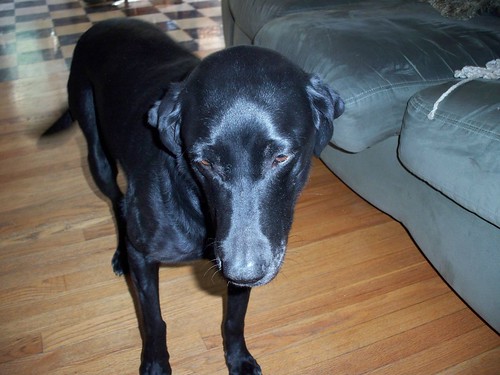