1. We now both have iPod Nanos. James exclaimed he never ever thought he’d own anything Apple. I, on the other hand, work amongst the Mac devoted, and as a consumer, have looooved their marketing. So, when the new 8G Nanos went on sale at Target, coinciding with my work anniversary, I decided to engage in a little retail therapy. Since my husband likes to tell me I have to have everything better than him, I decided a couple days later to buy HIM one, too. I even loaded it with a ton of music.  So now we’re finally in this millenium, and I enjoyed using mine while doing yard work on Saturday. He was fairly amused by the “shake-to-shuffle” feature, which he proceeded to do for about five minutes (while it was hooked up to a speaker).  Mine is turquoise, his is black. I think they’re stupendous.

2. So I went to the Apple store on the Plaza, to get an armband thingy. I couldn’t have felt like a bigger Luddite if I’d tried.  I determined that one of the qualifications to be an Apple Genius is to have a really interesting haircut.

3. When we were at Em Chamas, there was one waiter who didn’t have much showmanship. He was the one serving flank steak. So now the big joke at home is to flip one’s emo hair while braying “FLANK STEAK”, just to illustrate your attitude and disdain for the situation at hand.

4. I have a dear friend coming to visit this weekend, so I was working on cleaning the guest bedroom. In the process, I discovered that I have a lot of yarn. That job springboarded to my Huge Project, and you can see, I’ve got some good storage upstairs. And a lot of yarn. 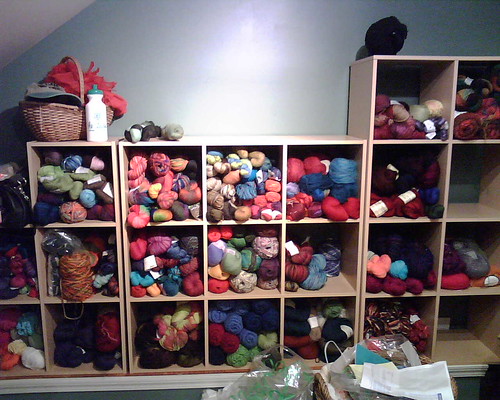 I still have a lot of work to do, but this makes me happy.

5. I need sunshine. This doldrums- rain crap, combined with freeze warnings, is making our household very emo. We are ready for spring.  Our thoughts on the weather can be accurately captured with two words:  FLANK STEAK.

6. My (very conservative) friend Shan accidentally went into a gay bar on one of our trips to NYC. He was reassured by the bartender (female) that it wasn’t, they served all kinds (including the two gay men at the bar).  He then told us it was a unique bar, because it had all these roosters all over the place.  I responded by asking him if he thought perhaps all the cocks in the room were a CLUE.

7. My friend Laura is finishing her final week of retail hell at Macy’s, before starting a really kick-ass job that will use her education and skills. She had posted about a certain crazy ceramic rooster that had gone on clearance and would make a great white elephant gift.

8. My friend Shan’s desk, as of last Friday: 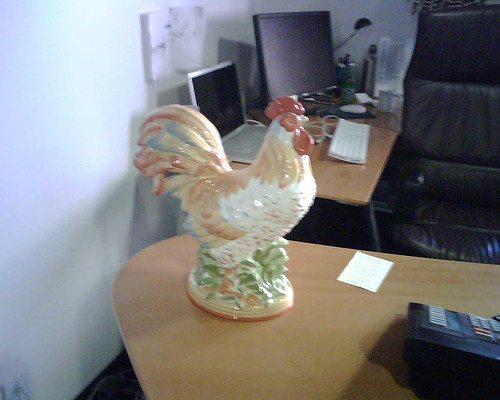 I love doing stuff like that. Ceramic rooster – $17. Making everyone laugh – worth every penny & then some.

9.  I finally got a Blackberry that works, exchanged by the eBay seller. I’ve discovered that you can chat with other Blackberry peeps (I have two!) and you can look up directions to Em Chamas because it’s in the Northland and you can’t remember the road, and you can see your email all the time. It’s pretty cool, I must say – and yes, I’d love an iPhone, but right now I’m stuck with T-Mobile (the aforementioned G-Foible) and this phone will at least get me through the end of our contract.  Still have that RAZR if anyone would like to take it off my hands; got a direct connection to Satan, should you need to be phoning him up anytime soon.

That’s it for today! Shake it up!